What is diaphragm pump? 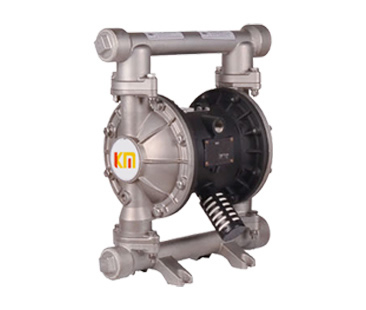 Diaphragm pump is a special form of positive displacement pump, which depends on a diaphragm plate to change the volume of the suction and discharge of liquid studio.

The performance of the pump is similar to that of piston and plunger pumps, but the reciprocating drive is a flexible diaphragm made of metal, rubber or plastic. The main advantage of this arrangement is the elimination of all packing seals and shaft seals that are susceptible to the delivery of liquids. Of course, this is extremely valuable for equipment requiring the delivery of flammable or toxic liquids.

The conventional low-flow diaphragm pump is designed for metering use and uses a plunger to operate in an oil cylinder to drive a metal or plastic diaphragm. The pump with a construction pressure of more than 6.895MPa (1000lbf/in2) and a flow rate of about 1.135m3/h(5gal/min) per cylinder has all the characteristics of a plunger metering pump, with the added advantage that the cylinder head of the pump is completely separate from the drive and can be installed at a distant location (even immersed in liquid).

1) Due to the use of air as the power, so the flow with the change of back pressure (outlet resistance) and automatic adjustment, suitable for medium and high viscosity fluid. The working point of the centrifugal pump is set with water as the benchmark. If it is used for fluid with slightly higher viscosity, it needs to support reducer or frequency conversion governor, and the cost is greatly improved. The same is true for gear pump.

2) pneumatic diaphragm pump in flammable and explosive environment with pneumatic pump reliable and low cost, such as fuel, gunpowder, explosives transport, because:, after grounding can not produce sparks; Second, no heat generation in the work, the machine will not overheat; Third, the fluid will not overheat because the diaphragm pump on the fluid agitation is small.

3) in the site of bad places, such as construction sites, industrial and mining wastewater discharge, due to the impurities in the sewage and the composition of complex, easy to plug the pipeline, so that the electric pump will form a high load, motor heating vulnerable. Pneumatic diaphragm pump through particles and flow adjustable, pipe blockage automatically stop to unobstructed.

4) In addition, the pneumatic diaphragm pump is small and easy to move, does not need a foundation, occupies a small ground, and is simple and economical to install. It can be used as mobile material conveying pump.

5) In the treatment of hazardous and corrosive materials, the diaphragm pump can be completely separated from the outside world.

6) Pneumatic diaphragm pump can be used to transport chemical properties of more unstable fluid, such as: sensitive materials, flocculation, etc.. This is because the shear force of the diaphragm pump is low and the physical impact on the material is small.